Sensitivity to smells is a very common issue – and a serious one.

Fragrance free is what you need.

It doesn’t matter where you are – the smells and chemical fragrances are everywhere:

Avoid is step one because if you don’t avoid chemicals, it is more work for your genes to clean up.

If your genes are tired, lacking nutrients or blocked, these chemicals will make your genes dirtier.

I don’t care that everyone wears fragrances.

I don’t care that most companies have fragrances in their products.

I don’t care that most people think fragrances are just – well – fragrances. 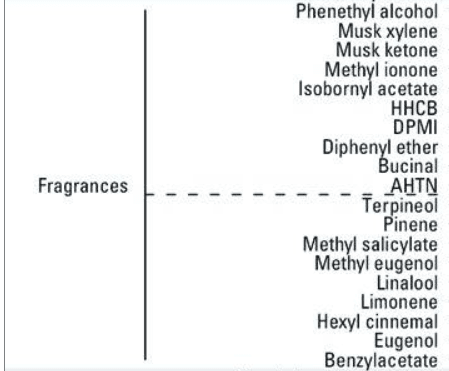 Let’s look at just ONE of these chemicals, shall we?

Let’s break down xylene a bit more – because this one is quite toxic and labs actually test for xylene exposure.

“Elimination of xylene is slower in individuals with a greater percentage of body fat. The primary effects of xylene exposure involve the nervous system by all routes of exposure, the respiratory tract by inhalation exposure.”

“At acute-duration inhalation concentrations as low as 50 ppm, xylenes produce irritant effects on the eyes, skin, and mucous membranes; impaired respiratory function; and mild central nervous system effects, including headache and dizziness. Increases in subjective reports of eye irritation, sore throat, and neurological effects (anxiety, forgetfulness, inability to concentrate, and a sensation of intoxication) were noted following chronic-duration occupational exposure at 14 ppm. Irritation of the eye may occur from contact with xylene vapor or from direct contact with xylene liquid, in which case photophobia, redness of the conjunctiva, and partial loss of the conjunctival and corneal epithelia have been reported. Slight-to-moderate eye irritation has also been observed in rabbits following direct instillation with ≥23 mg/kg mixed xylenes. With increasing airborne xylene concentrations of 100– 400 ppm, other neurological effects reported in acutely exposed human subjects include retardation of response times and impairments in memory and body balance. Acute exposure to an estimated 10,000 ppm xylenes elicited tremors, mental confusion, and depressant effects (narcosis) on the central nervous system that caused at least one fatality due to respiratory failure. All of these effects are related to the lipophilic properties of xylenes, which interfere with the integrity of cell membranes and alter neuronal function. In addition to neurological and respiratory effects, an increase in the reporting of nausea was noted following controlled exposure to m-xylene at 50 ppm. Symptoms of nausea and vomiting have also been noted in workers exposed to xylene vapors.”(source)

Test for xylene exposures as xylene is everywhere – including many jobs, offices, homes and more.

Your zipcode can be really high in xylene which may be one reason why you’re sensitive to smells.

Here are the top 13 cities in the nation with highest xylene releases – due to the gas industry most likely: Being sensitive to smells is reasonable.

The question is how to get others to be reasonable that you are sensitive to smells?

How do you get your healthcare professional to help with this?

“A chart review of 2,922 histories taken by 137 third-year medical students showed that smoking status was documented in 91%, occupation in 70%, and specific occupational exposures in 8.4% of the total number of cases. Patients less than 40 years of age and women were significantly less likely than older patients or men to have their occupation and industry noted [Marshall et al. 2002; McCurdy et al. 1998].” (source)

The key tip that you need to know – and your healthcare professional:

“The single most important aspect of the approach to patients with potential occupational or environmental disease is to have a high index of suspicion and to follow through on that suspicion.” (source)

Talk with your employer that you are sensitive to smells and that it is affecting your work performance.

Provide this guide to your employer so they may review and take informed action on your behalf. (source)

According to the American Disability Act, fragrance-free is not necessarily required by law. Actions should be taken though to improve your surroundings, such as:

How to reduce sensitivity to smells

This is a complex topic and one that is an entire book in of itself.

The first step is to reduce exposure and avoid the most significant exposures.

I’ve detailed many exposures and provided resources in this article discussing how we’re so toxic from chemicals.

Here is a snap shot of common exposures:

Yes, gas stoves and ovens are producing a ton of formaldehyde and chemicals. You need to get them out of your house. Once you limit exposures to smells, now your genes can actually catch up and start reducing your toxic burden.

The best way to reduce body burden of chemicals is by sauna.

I’ve written an article on the benefits of sauna.

Which genes are associated with sensitivity to smells?

A number of them.

A big one is the GPX and GST pair of genes as they have to do with glutathione. Summary to reduce your sensitivity to smells:

Are you sensitive to smells?

How do you cope?

How did you recover?